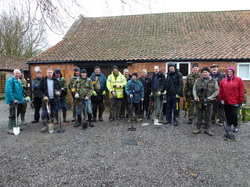 Today around 20 members of the club visited Secret World in East Huntspill.
The day started of with a little rain but soon the sun came out to play with us. The members headed off to the fields for the day and the finds can bee seen below. Half way through the day we were treated to a guided tour around the rescue centre. We managed to see a wide range of animals in their care. What a fantastic job they do. Well worth a visit!!!!.

We would like to thank everyone at Secret World for their hospitality and great day out. We hope to be of service again sometime to help you raise much needed funds.

If you are a land owner that could sponsor a field or two for us to hold a charity club dig in aid of Secret world please get in touch via our contacts page.
Thanks again

AN OVERVIEW OF SECRET WORLD

Pauline and Derek Kidner opened New Road Farm (now Secret World) to visitors in 1984 and it was after seeing the way that the animals were being cared for that the public started to bring injured wildlife to the farm in the hope they could be cared for here. From here Pauline very soon developed a great love and interest for wildlife, and as her knowledge grew, so did her reputation for caring for these wild animals in need.

Secret World (or Bluebell Sett as it was then known) was founded in 1992 to support this wildlife work which has been recognised nationally by winning the BBC Animal Country Award in 1995 and seen in numerous TV programs. Its name honored 'Bluebell', one of the first cubs reared by Pauline. Although she was released and free to go, Bluebell chose to stay at the farm where she raised two cubs of her own and adopted three others before her death in 1994.

Pauline Kidner was also nominated for the BBC Animal Awards in 2001 for 'contribution to animal welfare' award. She was one of the three runners-up but unfortunately was not successful in winning the award.


Bluebell Sett became a registered charity in 1995, but then after the success of the ‘Secret World’ television series on ITV, the charity was officially renamed as Secret World Wildlife Rescue in 2005, in a move that saw Bluebell Sett incorporated within the Secret World banner.

Secret World Wildlife Rescue is now the only 24/7 wildlife rescue centre in the South West, annually caring for over 4000 sick, injured and orphaned animals. The aim of our rescue and rehabilitation work is always to return the animals to the wild whenever possible, and believes in always giving an animal the best possible care. This includes the employment of trained animal carers (including a qualified Vet Nurse), and a commitment to provide medication, veterinary care, and time to recover as required.

We are also lucky to have a team of around 623 dedicated volunteers who assist in a number of ways. This ranges from helping on site here at Secret World performing animal care duties, cleaning animal enclosures or maintenance, through to making themselves available to pick up injured animals and bringing them to Secret World, and many jobs in between.

Secret World takes an active role by opening its doors to the public 6 times a year, visiting schools, providing Wildlife First Aid training and by working with colleges and other training establishments. Since 2007 Secret World rescue cases have risen by 30% and predicted to double in the next three years alone. The breadth of our work is enormous, as is the competition for much needed funding to ensure it can continue. With no government funding, Secret World relies on charitable donations and support to ensure that this essential work is able to continue. To find out how you can help Secret World, either by joining our band of volunteersor helping to raise money

You Can Make a Donation To Secret World Here